The largest and most awaited festival in the country has reconfirmed its true value this time as well. The 5th edition of Gustar lasted 3 days and registered a record number of visitors, who had unique experiences with special artists.

Gustar’s jubilee passed as best it could. The festival, organized in the 5th edition at the Orheiul Vechi Cultural-Natural Reserve, has become an event of national importance, which music lovers and travelers from all over the world mark in red on the calendar.

The 2014 edition made available to the public 3 days of rest on the green grass, fresh air, and genuine music from the Balkans and central Europe.

After 16 years of absence, the "Bat Night" Festival had returned at Gustar. Visitors had the opportunity to communicate with chiropterologists and find out more interesting information about bats.

The audience enjoyed a lot of bands and performers from Germany, Serbia, Portugal, Hungary, Poland, Israel, Romania, and the Republic of Moldova. Artists who have performed on the Gustar stage this year include Goran Bregovic, Estas Tonne, Milk & Sugar, Cristina Kiseleff, El Saffron, Talya Solan, Adriana Rusu, and many others.

The 2014 edition, was fascinating and at the same time complicated for us, the Gustar organizers. We wanted with all our hearts to bring Goran Bregovic to perform on our stage, but being a requested artist, he could not get there on weekend days. Therefore, we have made the extraordinary decision to extend the festival to Monday. We were not sure how the situation would unfold, but on Monday, an hour before the concert, we were surprised by the traffic jams of a few kilometers and the plenty of spectators who came to watch the artist, although it was not a weekend day.

The legendary Goran Bregovic and his orchestra set fire to the atmosphere in Orheiul Vechi, and thousands of people sang and danced to the rhythms of Balkan music.

The Gustar Festival culminated with fireworks, which impressed with a special concept. 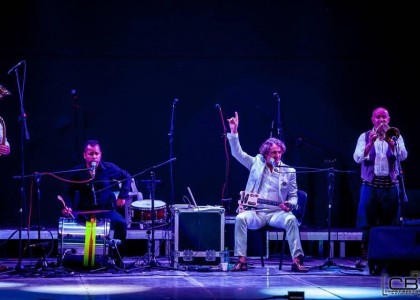